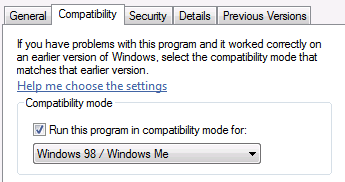 I found NcFTP to be a useful toolkit for use in scripting. Aside of a linux version, it also has precompiled binaries for Mac and Windows.

The toolkit contains different programs which are very useful for use in various scripting (such as automatic file upload/download, and more). Both regular FTP and SFTP are supported.

Google Chrome can start up in fullscreen (F11) by default. This is done by enabling Kiosk-mode during startup. To do this, set the shortcut to Chrome like so:

Windows 7 has a an application called Sticky Notes, which does just that. The contents and layout of the stickies are stored in a single file: %APPDATA%\Microsoft\Sticky Notes\StickyNotes.snt

If you wish to backup or transfer your sticky notes, this is the file you need. When restoring, simply place the file in the same location and you're done with it.

This error occurs when the DC on which this event id is generated has been powered off unexpectedly, or when the system volume was full. The error signifies that the database journal (used during replication) has been cut off, resulting in the replication being halted, which is by design.

To resolve, you can tell NtFRS to automatically repair the problem and continue with the replication by changing the value of a certain registry parameter. The parameter can be found at HKEY_LOCAL_MACHINE\SYSTEM\CurrentControlSet\Services\NtFrs\Parameters\Backup/Restore\Process at   ...

Scan to computer on networked Brother MFC not working
edited by on November 5th 2012, at 17:53

If the scan-to function of your networked Brother MFC mysteriously stops working, it may be because of strict firewall settings. The scanner attempts to connect to the Brother ControlCenter software on your PC via a directed UDP connection to your computer. If this is blocked at your computer (by e.g. a firewall), the scan function no longer works.

Completely reset offline files in Windows
edited by on November 5th 2012, at 17:40
When using offline files/folders, it sometimes goes very wrong, leaving the whole sync of offline files in an unusable state. I personally had problems with a lot of clients that used this feature. In theory, it works nicely, but every now and then, it's prone to go very bad.

The biggest issue is that as a user, you don't really have much control on the whole process, making it difficult to adequately resolve problems. And when it does go wrong, even what little you still can configure and change, becomes inaccessible, resulting in an offline files system that's completely dead.

Luckily, there is a way to quickly resolve the matter. With a simple registry value in the Windows Registry, you  ...

Read here why it is not, and why you should migrate to Joomla 2.5 as soon as possible:

An interesting read about the "rules of engagement" (or rather, lack thereof) when dealing with Joomla websites:

Deleting an account in Apple Mail deletes e-mail messages
edited by on October 17th 2012, at 09:21

Be careful when deleting a POP3-account in Apple Mail. Doing so will also remove all messages from the folders Inbox, Sent items and Trash, even if they are no longer on the server and only available offline.

To prevent this from happening, move/copy all messages to folders created inside the On My Mac section. These are folders that are kept locally and will not be affected when removing accounts. After which, you can safely remove the account.

Disable sent items in Outlook when using Google Apps Sync
edited by on September 24th 2012, at 12:32

Because Google Apps (Gmail) automatically puts a copy of your sent items in the Sent Items folder, it's rather redundant for Outlook to do this as well. Although Google Apps prevents the creation of doubles, it's better to just let Google Apps do it, as it's one less thing to upload (particularly useful on slow connections).

To turn off the copy of sent items in Outlook, turn off the option Save copies of messages in the Sent Items folder. You'll find this in the Outlook options in the Mail tab, section Save messages.

dnsmasq + openvz: set capabilities failed
edited by on September 24th 2012, at 12:24
When running dnsmasq inside a VPS on an OpenVZ server, you may get an error while trying to start up dnsmasq (this is in particular the case for Debian):Starting DNS forwarder and DHCP server: dnsmasqdnsmasq: setting capabilities failed: Operation not permitted

This is because dnsmasq does not run as root (which is a good thing). What happens is that dnsmasq gets started as root, then attempts to set privileged functions to the dnsmasq user before changing user from root to that user. When setting these capabilities fails, you get the above error.

The reason for failing is usually because either the kernel is missing the required features, or, in case of OpenVZ, the permissions are not pas  ...

Apple and the Wine development team are currently working on fixing the issue, but it's unlikely that the fix will come from Apple. Luckily, certain patches were already made available in the last few days, fixing the issue for at least a few versions of the Wine engine.

XQuartz, the alternative X11 for Mac, has a new release available which fixes the issue: http://xquartz.macosforge.org/trac/wiki/X112.7.4.