It's getting closer and closer to Albatros's Soaring camp 2010, and the places are getting filled up as the days go by. If you're still interesting in joining this year's camp, you should hurry up as there aren't a lot of places left. If you're even remotely into flying and want to have two weeks of flying fun, along with one hell of a camp with a great atmosphere, this is your chance. Click on the image to get more information; while the site's in Dutch, you can use the contact form (link at the bottom-right) to get all the info in English.

The soaring camp takes place from Juli 12th until July 25th at the airfield (EBZH) at Kiewit, Hasselt (Belgium). Meals  ...

Over the last year I managed to gather my required 50 hours of solo flight time, and yesterday was a good time as any to take my exam for a passenger's license.

The exam itself was basically a revision of most elementary flight manoeuvers (stale turn, high turn, stalling, etc.), accompagnied with an additional back tow (i.e. when the cable does not release).

While I succeeded in my exam, it goes to show that even those things really have to be maintained; I was a bit rusty in performing some manoeuvers. Guess I'll be practising them a bit more.

The long awaited Condor patch v1.1.3 has been released. It fixes a critical bug with the newer nVidia drivers, and was particularly a hassle when running Condor in Windows 7.
Aside of the fix, an additional tow plane was added in the mix.

Flying season 2010 official kick-off
edited by on March 14th 2010, at 00:43
And so the flying season has started again, pretty much in the same way it ended: it was a dark damp and cold day, and not at all without technical difficulties.
The issues with our tow plane that were supposed to be fixed weren't really fixed. Our backup did perform flawlessly (a luck we did not have at the end of last season).

All of the little troubles and discomforts did not thwart the pleasure of having done about a dozen flights, most of them check flights to sign on after a long winter's break. Although having flown last week, it feels good to have flown a succesful tow and subsequent flight and landing on our own field. Kinda reminds me of last year's start and all.
The winter is ru  ...

Soaring club Albatros (EBZH) has organized an online competition in the soaring flightsim Condor. In this competition, participants have to fly a set of tasks where they have to try and get the highest score by obtaining the highest average speed.

There are seven tasks in the Provence, set out of Vinon. The other seven tasks are all based in Slovenia (the default scenery of Condor). The tasks prove to be a mix of flying by thermals, and a good deal of ridge flying. For each task, up to three tries are possible. The best of three count as the final result for a given task.

Results of the competition can be found here: http://www.zweefvliegen-hasselt.be/Condorcup.

Albatros, recommended by SFA
edited by on December 8th 2009, at 16:19
Soaring club Albatros received the unique opportunity to present its beloved sport of soaring at the open house day of Sabena Flight Academy on December 5th.

Soaring clubs united at Sanicole '09
edited by on September 20th 2009, at 23:30
The 33rd Sanicole Airshow 2009 can definitely be called a success! An estimated 35 000 visitors came to the airfield of Hechtel to witness the yearly airshow held there. An absolute record, so it seems. 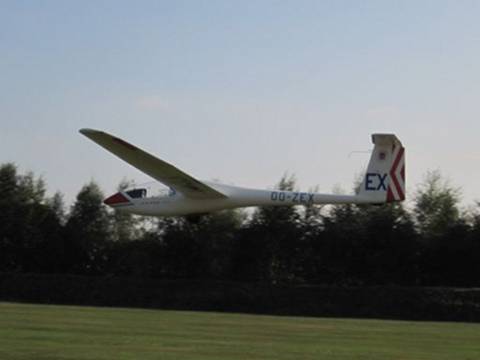 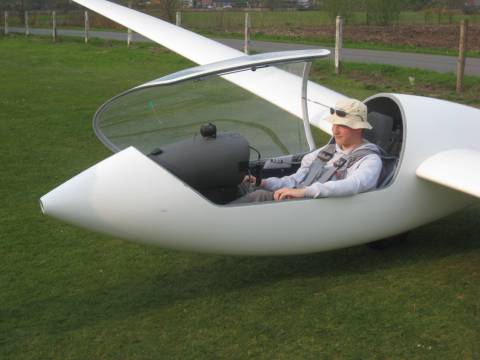 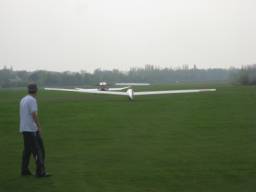 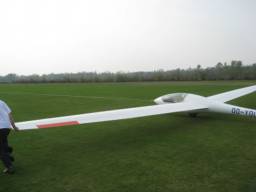 Going solo...
edited by on August 31st 2008, at 18:39
After a full year of education, I finally got the clearance (well, actually, my instructors basically forced me to do it) to go solo.

Soaring camp 2008 @ Kiewit, Hasselt
edited by on April 9th 2008, at 23:43
This summer, Albatros (the soaring club I'm flying at), is organizing a soaring flight camp. This camp is for both people that haven't flown yet, but would like to experience something totally different, as well as for the more experienced pilots, who which to further hone their skills.

Dream flight (Schempp-Hirth day @ Albatros)
edited by on September 29th 2007, at 13:59
Last weekend was another edition of Schempp-Hirth day. Schempp-Hirth is a German builder of gliders, and for several years now, they lend us some of their machines to get a feeling of the latest innovations and a bit of the future in the gliding world...

This year's machines were most interesting, to say the least:

The DuoDiscus XL is the bigger successor of the DuoDiscus X, a flyer for two, with a wing span of a dazzling 20 meters. The XL has all the aspects of the X, but its cockpit has grown significantly in size, allowing for larger persons to fly in it as well. Several other improvements have been made for a better flying comfort.
The XL we had is currently the only glider of its type  ...

Some in-flight recordings, taken when I was passenger on my orientation flight.

The footage was take with my PDA cam, so it's not very high resolution. Format is MPEG-4 with 3GPP subformat, but normally any decent media player will be able to play it back (I know that at least mplayer with AMR audio codec can).

For more information, visit their site http://www.zweefvliegen-hasselt.be/ (website in Dutch).

Time for a new experience, and a new hobby in my life.
Thanks to Bart (aka: my boss), who took me and a collegue of mine for a figurative spin around the block: in the form of gliding...

Next thing I know, I was signing myself up at Albatros Zweefvliegclub (note: website in dutch) at Hasselt (Kiewit), and already have had two lessons.

Those that care may keep their fingers crossed each time I'm in the air (usually on saturdays), and pray that I don't drill the glider down into the ground... ;-)

Quote
« Stripes on a tiger are hard to change. »
The Noisettes