Backtrack:
Blog
showing posts tagged with 'rds'
Reset 120 days RDS grace period
edited by on October 29th 2020, at 09:19
When installing the Remote Desktop Session Host role on a Windows Server, you get a 120 days grace period where you do not need to specify a license server and/or have licenses installed. After the grace period, it is no longer possible to log in with even a single session through RDP, unless you use the admin console (/admin option). Luckily, you can reset this counter by getting rid of a specific key which gets created at the start of the grace period, effectively resetting the grace period counter. This can even be done if the grace period isn't completely over.

Log in directly on the server (or use the /admin option) and fire up regedit.

Navigate to the key: HKEY_LOCAL_MACHINE:\SYSTEM\  ...

Unable to add RDSH (session hosts) to a collection (error: Unable to retrieve the session collection
edited by on April 20th 2020, at 09:50
When attempting to add new Remote Desktop Session Hosts (RDSH) to a session host collection, you may run into the following error message:

This error can possibly be accompanied by additional messages.

When checking the logs, you apparently cannot find anything wrong with the collections: they show up correctly in Server Manager and users can still log on to the collection using existing servers.

Sometimes it can happen that the security descriptors of one of the collections get corrupted, in which case it is not possible to add a new session host, whether it's through Server Manager or through Powershell.

In 2012, it is not possible to use one RDS WebAccess to service multiple brokers. It can only be used on a single deployment. Attempting to add the WebAccess server to another deployment will overwrite the configuration of the first deployment.

A better approach would be to create a single deployment with an RDS WebAccess, RDG and broker (single or HA), and add your "different deployments" as collections to the broker.  ...

It is currently not possible to directly map a drive letter to a redirected folder when connecting to a server using Microsoft RDP. Most programs do not require a drive letter but in case you do need a "local path", you can create a symlink in order to achieve this.

This will create a "symlinked" folder on your C-drive, which you can then use to work with files and folders of the redirected folder. The symlink is persistent across reboots.

Remote Desktop Connection
The remote computer requires Network Level Authentication, which your computer does not support. For assistance, contact your system administrator or technical support.

NLA support requires the following on your computer:

The latest version of the RDC: Remote Desktop client v7.0, although the 6.1 update will also work.

The component which takes care of NLA, called Credential Security Support Provider (CredSSP) is not enabled  ...

This error can occur if the activation process is not able to set the required security permissions on the folder.

The handling of UPDs is done by the RDS server itself, and therefore, the computer account needs to have full access permissions on the folder where the VHD files are stored. When enabling UPD, Server Manager will automatically attempt to set up the necessary permissions. When this fails, the above error is displayed.

One such scenario can occur if the shared folde  ...

Turn off registration prompt on Adobe Acrobat Standard/Pro (useful for RDS)
edited by on January 29th 2016, at 10:24
When a new user logs on to a computer and they start Adobe Acrobat Standard/Pro for the first time, they will be prompted with a registration window. This may not be something you want for your users, especially not on RDS. Up until version 9, this prompt could be turned off through a registry setting, but this no longer works.

You can however also turn off the registration window through another way, during installation. Unfortunately, this requires you to uninstall and reinstall the software but the result does work perfectly.

If Acrobat is already installed, uninstall it first.

Open a command prompt and navigate to the installation media (or folder).

Perform the installation by using   ...

But there is an "unofficial and very unsupported" workaround which allows you to publish the full desktop in addition to the RemoteApps from the same Collection. This can be achieved by manually toggle publishing through the registry on the server running the RD Broker/Gateway.

If you're running Internet Explorer 10 or later, you may get this error when trying to log on to a computer using RDP through Remote Web Workplace:

You can resolve the issue by adding RWW to the Compatibility View list in Internet Explorer.

You can add RDS servers to the list of computers in Remote Web Workplace, making them available to anyone with access to RWW. The process is simple, requires no reboot and is immediately active.

RDS shadowing in 2012 R2 (no scenario deployment)
edited by on January 8th 2014, at 12:13
Remote Desktop Services shadowing is back with 2012 R2 after a leave of absence in regular 2012. However, for this to work out of the box, you need to have the scenario-based RDS deployment, which installs a whole bunch of stuff even when unwanted.

Allow RDS shadowing without consent through GPO
edited by on January 8th 2014, at 11:55 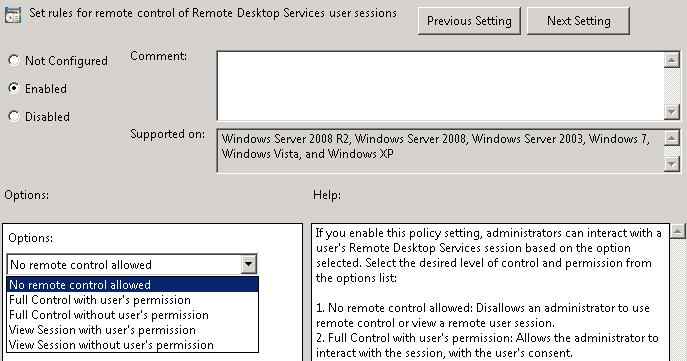 Allow non-administrators to do RDS shadowing
edited by on January 8th 2014, at 11:42

Starting from 2008, configure the firewall so connections to port 80/tcp are accepted.

Install the following roles:IIS and dependencies

Download and install the 2x Cloud Portal. Select the right

RemoteApps are black windows on a Windows 2008R2
edited by on September 19th 2012, at 12:48
When running some RemoteApp, published from a Windows 2008R2, you may sometimes experience that the application does not start properly. In the startup window, when clicking on the Details button, you see a black window and no contents at all. The problem mainly occurs when working via internet, via a wireless network, or some other slower-than-normal link. Additionally, when your session is logged off on the RDS server, you will be able to start the RemoteApp once; subsequently restarting the application results in the above specified behaviour.

The issue is caused by the Remote Desktop Session Host display driver on the RDS server. During the initial connection, the monitor layout packe  ...

Shadowing a Windows 2008 Terminal Services session results in disconnection
edited by on July 2nd 2012, at 18:02

When running a Windows 2008 (R1) Terminal Services, and you connect with a RDP 7.1 client and try to shadow another session, it may happen that both clients get disconnected.

KB2523307 tells us that this is caused by RemoteFX being active when a new client is used.

A hotfix is available to address the issue, and can be requested via the KB.

EDIT: for your convenience, I've attached the hotfix (English only!), at least until Microsoft requests its removal...

Remote Desktop Server lock-down guide
edited by on July 2nd 2012, at 17:19
This article is a reference to a number of articles and links to provide information about how to succesfully lock down your Remote Desktop Server (2008R2) or Terminal Server (2003 / 2008). It is not a definite guide to how to perform a lock down, but will provide certain pointers, and highlight certain pitfalls. It is a work-in-progress and several additions will be made as the guide progresses.

You obviously need a Windows-domain running AD for lockdown to work properly. A standalone server running a local group policy can't be locked down enough to be useful. A domain is highly recommended.

Your DC or a member server (can be the RDS / TS as well) should have the Group Policy Mana  ...

In User Configuration, Preferences, Windows Settings, Registry, add a new entry. Whether you want to enforce or not, is up to you. Either choose create (only applied once), or Replace (always apply).

The value is a DWORD value in HKEY_CURRENT_USER\Software\Microsoft\Windows\CurrentVersion\Explorer\HideDesktopIcons\NewStartPanel, named {20D04FE0-3AEA-1069-A2D8-08002B30309D}. This is the CLSID for the Computer icon. Set it to 0 to have the icon shown on user's des  ...

Quote
« When a bird does poo poo in your eye, be happy elephants don't fly. »