If you ever need to perform connectivity troubleshooting and need to see whether a Dell server's iDRAC can reach a certain IP, you can use the iDRAC diagnostics command function to perform a "ping": 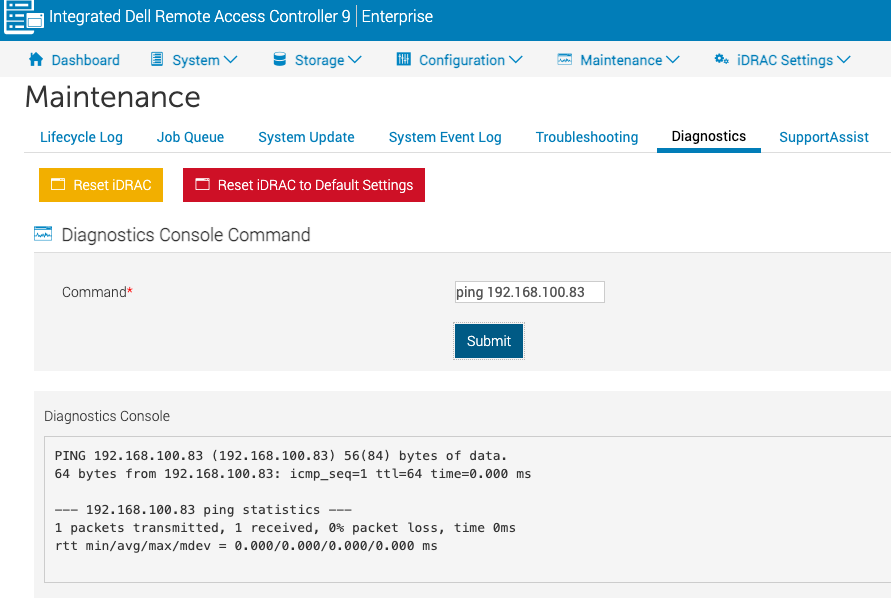 Switch firmware update reference guide
edited by on May 13th 2020, at 10:00
This article is a reference guide for updating the firmware on switches. As I handle a broad range of switch vendors and models, I got tired of looking up the commands, and decided to bundle it all here in one place for easy reference.

Note that this document is not a step-by-step guide to update a specific switch but rather a reference for which CLI-commands to use.

First, look up current version and active boot bank. Can be either A: or B:

When upgrading from USB-stick, change tftp:// to usbflash://. USB-stick needs to be FAT32.

The certificate for HiveManager NG has expired on October 23, 2019. As a result, Dell N Series switches running an older firmware or an older version of the HiveAgent, can no longer connect or be connected to HiveManager NG after this date.

The solution is to either update the switch firmware to at least 6.6.0.13, or manually update the HiveAgent to 1.1.29.

Notes on using a QSA to convert QSFP(+) to SFP(+) on Dell switches
edited by on March 27th 2020, at 14:13
It is possible to convert a QSFP or QSFP+ port to an single SFP or SFP+ port using the Quad to Small Form Factor Pluggable Adapter (QSA). However, in order for this to work, you'll need to configure the QSFP+ port into break-out mode to 4x10Gbps, similar like you would when using actual QSFP to 4xSFP break-out cables.

For OS10, the CLI for this action is:

The download is delivered as a ZIP-file and contains a single binary file with the extension .bin. When unpacking this ZIP file through the Finder, the BIN file also gets unpacked. In order to successfully get the BIN file, you need to unpack the file through Terminal:

Start up Terminal and navigate to the folder where you downloaded the ZIP file containing the firmware.

Backup switch configuration to TFTP (CLI reference)
edited by on August 24th 2018, at 15:14
In case of disaster, it is usually a very good idea to periodically back up the configuration of your network switches. This article lists syntax for backing up configuration to a TFTP server for different vendors.

In the syntax examples below, the IP for the TFTP is 1.2.3.4, and we're writing to the file switch.cfg.

Note that this article is definitely not complete. If you have additions to this article, please post them in the comments.

The syntax for Dell and Cisco switches is mostly the same. For N-series and PowerConnect, a summary is displayed which needs to be confirmed, which is not the case for Cisco and Dell S-series.

SSH could not be enabled.

To generate the keys, and configure and enable SSH, log on to the switch using the console cable or log on through Telnet:

Go into EXEC mode, then in CONFIG mode:

Generate both the RSA and DSA keys:

Now, you can enable the SSH server:

Optionally: you can also change the default listen port:

With more recent firmware versions, you are no longer able to   ...

DellEMC offers a free-to-try virtual appliance of DataDomain, allowing you to do a Try & Buy. You can download the appliance here:

Dell Rapid Recovery: SQL Server backup fails with VSS error
edited by on August 4th 2016, at 17:25
Backup of a SQL Server may fail with a VSS error.

From the log, the following message can be found:

Error
Destination path is not empty. Please choose another one.

If an upgrade was cancelled or has failed for some reason, the following upgrade attempt will try to perform a complete installation. Because not all files and/or folders have been removed, the installer will not continue and will display the error message.

To resolve the problem, manually remove the files and folders, but leave any registry keys intact to ensure a proper upgrade without losing any settings.

Additional information, including a compatibility and upgrade matrix can be found here:

At the time of writing, the compatibility matrix shows that Agent version 5.4.3  ...

Create an address object for the additional subnet.

Add a static route for the additional subnet:Source: ANY

Destination: the address object you created in the previous step.

When upgrading Dell Force10 switches, keep in mind that starting from FTOS version 9.10, MTU per port can no longer be set to 12000. It is now limited to a maximum of 9216, making it the same maximum as the DNOS (Dell Networking) firmware. After the firmware update, the MTU of each port will automatically be adjusted.

For jumbo frames, this doesn't really change anything. An MTU 9216 on the switch still results in a datagram MTU of 9000, sufficient for e.g. Equallogic storage.

Equallogic FW 8.x introduces default policy for daily automatic snapshot creation
edited by on April 8th 2016, at 17:08
Version 8 of the Equallogic PS firmware introduces a default policy for automatic snapshot creation. This means that by default, a daily snapshot will be created for each volume present in the group. The policy also states to keep 2 snapshots, which can be very space consuming, quickly filling up your Equallogic.

When upgrading the firmware to version 8 from an earlier version, this policy will automatically be created and activated, without telling you, causing headaches among those unaware of this change.

From the CLI, you can check whether the default policy is active:

To turn off this policy from the CLI, type this:

Each rack server has an i-Button on the front panel of the server. To soft-reset iDRAC, hold down this button for 20 seconds.

If you still can log on using SSH, you can also reset it that way, saving you a trip to the server room. See the last part of this article to see how to do this.

To reset the iDRAC on a blade, you can log in on the CMC to do so.

From Chassis Overview, click Troubleshooting, then click on Reset Components (the third item in the submenu, next to Diagnostics).

If you cannot log in using the web interface but still have access to the unit through SSH  ...