Basically, the WRT54GL routers are running OpenWRT, a very lightweight linux distro, specifically designed for those type of routers. The router uses a Broadcom CPU, and uses the MIPS architecture. For more information, check the OpenWRT site at http://openwrt.org/.

At first, I was a bit worried about the differences between the full availability of the GNU C Libary, and the very slim version on the OpenWRT distro. Luckily, I quickly found out that the C Library on OpenWRT has the most used functions well covered.

Compiling C programs for MIPS might seem tricky (since you can't plainly fire up  ...

iTunes, iPod, iPhone, ... Everything with an i is the self-proclaimed way to the future. But technology spreads even further...

As I was cleaning out the spam quarantine box at work, I stumbled upon this promising title:

Is this the result of a merger between Apple and the plastic surgery industry? No, it wasn't, just a promising title but with zero content... ;-)

New WebIf for OpenWRT
by lunarg on January 8th 2007, at 21:23
With the life cycle of White Russian coming to an end, and the advancement in development seeming to dry out a bit in favor of Kamikaze, some people have released a rework of WebIf, called WebIf^2 (downloadable at http://x-wrt.org/)...

Currently, the interface only works on White Russian RC5, RC6 and 0.9 (at time of writing not yet released), but they are working on Kamikaze support - the main reason for lack of support is the difference between how configuration is handled between the two major builds.

The new web-interface can be installed without a hitch on your already existing OpenWRT install (provided it's one of the supported releases), and replaces the current WebIf version, with  ...

I said to post some more pictures about our christmas tree, and with presents, so here they are...

A picture of the presents, taken at christmas morning (well, if you can still call 1pm morning). 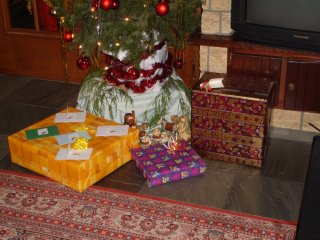 And of course, after the wonderful meal (I have photos of that as well, but don't want to bore you), the long awaited unwrapping of the presents: happiness all around!

And finally, once again to you all: happy holidays!

Happy new year to you all!!

Christmas in coming up...
Time to set up the tree, and get presents under it...

Here are some pics of this year's tree... 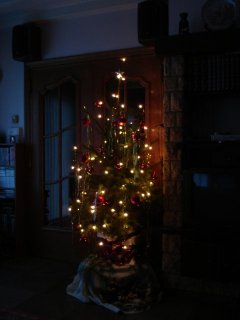 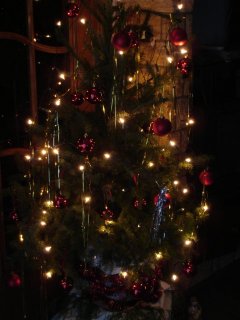 At the moment it's still missing presents.
The pics look a little dark. It's because I took them without flash, which gives it a much better effect, and bring out the little lights a bit more.
Later on, I'll make some more, with flash (and hopefully with some presents under it ;) ).

Ever wondered how much disk i/o is taking place on your linux-based server (or workstation)?

Here are some commands:

The iostat makes a snapshot of each available physical volume, and shows the current reads and writes of the volumes.

dstat is a more advanced code, and measures both disk i/o as well as network i/o in near realtime.

Bond... James Bond...
by lunarg on December 3rd 2006, at 21:20
After my regular DVD shop tempted me once more with the full set of James Bond DVD's, and again with another price drop, I could no longer resist. Ordered the entire set, in a deluxe case. Only a few days later, I could pick it up at the Kiala delivery point...

Unpacking the case was not that easy: the case was heavily wrapped in plastic, put in a box, and that box put in another box, taped pretty shut.

Once unpacked, I opened up the case and discovered the 20 double-DVD's, sorted according to date of the movie, starting with Dr. No - the oldest - in the upper left corner, and finishing with Die Another Day - the newest - in the lower right corner (see picture).

Got this link from a colleague:
http://www.linuxjournal.com/article/9454

It describes the inner workings of Postfix, the well-known mailserver for Linux.

Cool cool X1950...
by lunarg on November 26th 2006, at 15:18
Since it was my birthday, and due to the lack of presents, I found it to be quite normal that I got a present for myself. A quick visit to my computer supplier, delivered me this thing of beauty: a water-cooled ATI Radeon X1950XT from MSI.

It was a bit necessary for me to upgrade the videocard. Although my old X850 was pretty fast, it missed a few things. Since I'm a huge fan of TES4 Oblivion, I thought it would be nice to spend a little to get more out of the game, especially because Oblivion is already a pretty heavy game to run. As it was with my X850, I missed out on HDR, which seriously improves the in-game looks. And of course, 256MB VRAM was a bit tight; the game would often run out   ...

Quote
« Stripes on a tiger are hard to change. »
The Noisettes